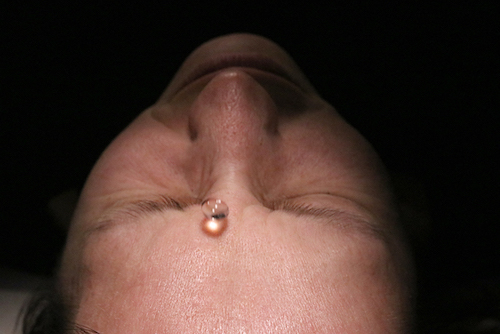 A symbolic Doomsday Clock has been ticking since 1947 in the 'Bulletin of the Atomic Scientists’. Based on actual threats such as nuclear risk and climate change, it shows the time left till the possible extinction of life on the planet. Since the start of the clock, the displayed time has seemingly stopped shortly before midnight, even though the minute arm has oscillated back and forth many times. In Atomic Time Torture, the ticking of the seemingly not-advancing time is metaphorically transformed into dripping water. Experienced on one’s own forehead, it reminds of an ancient torture method. The dripping is accurately synchronised with the international atomic time, using the same transmission technology used by radio-clocks and time-servers.